The Sutherland Shire Sydney, had a great need for a Church for many years with some 7,000 Parishioners distanced from surrounding Parishes.

The inauguration of the Parish was by Archbishop Stylianos, Primate of the Greek Orthodox Church in Australia at Sutherland Entertainment Centre where some 900 interested people met on Sunday the 19th of March 1995 under the guidance of His Eminence.

The Sutherland Shire was now an independent Parish. It was grateful to the Parish of the Resurrection of Christ, Kogarah for helping to service the area previously.

After Easter 1995 Services began in Gymea Technology High School Auditorium, Princes Highway, Gymea, once a month depending on the availability of a Priest. A 16 member Committee was established with Mr Stylianos Pambris as the President. This Committee took care of the initial coordination and early fund raising for the Parish to whom the Parish is very grateful.

On the 15th December, 1996 Father Constantine Varipatis was appointed as the Parish Priest by His Eminence Archbishop Stylianos. He began the difficult but blessed task with his Presbytera Eleni of starting a new Parish. Services were now held every Sunday and even during weekdays where the school permitted. Services are bilingual. The High School Auditorium served as a Church for another 5 years. Credit has to go to those few dedicated faithful who would set up chairs, icons, alter, etc. every week so that Services could happen. The difficulties that the Parish faced in these early stages were like gold being purified in fire. They were a blessing!

Parish Committees – Men’s, Ladies and Youth were re-organized. They met on a monthly basis at a small hall at Sylvania Heights Primary School under the guidance of our Holy Archdiocese. Greek Schools were established under the Parish in 1997. Sunday Schools, Youth Groups, a Playgroup and a Seniors Group were established. A Children’s Choir was established and chants every Sunday. Religious Instruction in Public Schools and some High Schools was organized. Also hospital visits and Pastoral visits to the elderly in their homes began. Coffee was organized every Sunday after Church. Also the wheels of fundraising were in full swing with afternoon teas, raffles, an Annual Dance, and sweets and chocolates sold every week after Church. Many thanks go to our Ladies.

The landmark of the Parish was the purchase of 4,400 square meters of a prime parcel of land consisting of 5 houses on The Kingsway, Gymea by the end of 1998. One of the houses purchased was renovated and used for weekday services and an office. The architectural and building plans for a Church were set into motion by Architects John Horiatopoulos, Gregory Koutoulas and Engineers Peter Douroudis and Luke Tsougranis. For the latter we always said this would be done in memory of his late wife Rodoula. All of this was coordinated in a very mature and professional manner by Mr Harry Exikanas, the current President, to whom, together with his gracious wife Maria, the Parish will be eternally grateful. Harry and Maria were no doubt inspired by their Parents. Harry’s late father George Exikanas was a tireless worker in other Parishes such as St.Andrew’s Church, Gladesville, and his mother Barbara served in the Central Philoptohos for many years. Also the difficult experiences of Maria’s parents in Communist Russia and Romania also imprinted on her the ethos of freedom and culture in the Orthodox Church. 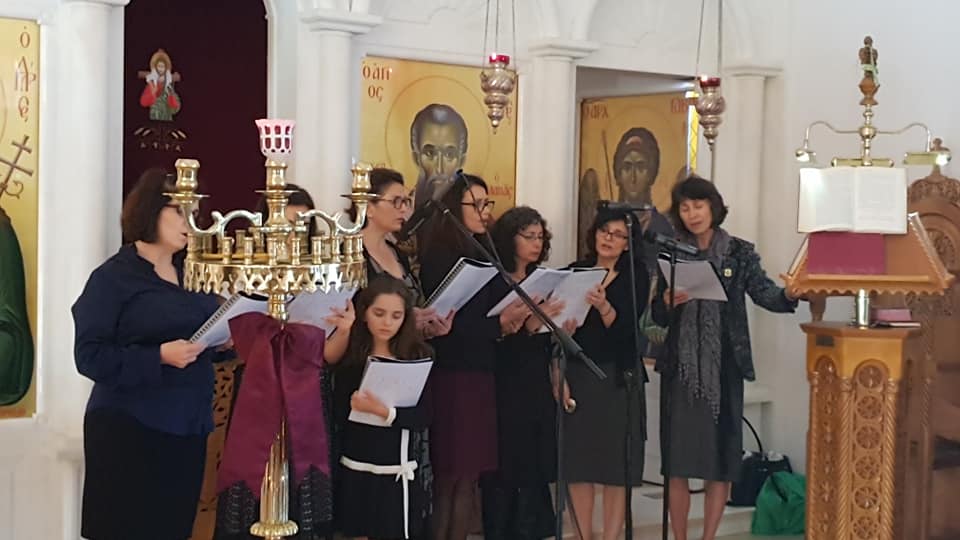 The building of the Church was completed in a record time of 6 months by Fugen Constructions. This was made possible by many faithful Christians who donated and worked extremely hard. In particular, our Parish Committee and Ladies Committee deserve a special mention.

Also we can’t thank enough those self-sacrificial and often anonymous donors that helped in the critical stage of building our Church.

The opening of the Church was on the 16th of December 2001 by His Eminence Archbishop Stylianos in the presence of the Premier of New South Wales, the Honourable Bob Carr, the Mayor of Sutherland, other distinguished guests and 1000’s of our Faithful.

To God be the Glory!

By God’s Grace the Parish is growing from strength to strength.

Dear Parishioners,
Hope you are well. Please note the following:

2) Greek Dancing Registration
and 1st Lesson with Maria Karabellas.
A) At Gymea Church Hall Tuesday 2 February
(beginners only) at 6.30 pm.
B) At Sylvania Hts Primary School Hall Wednesday 3 February for all ages. For any enquiries please call or text Maria on 0431 152 159.
THIS IS A GREAT OPPORTUNITY FOR OUR
YOUTH TO PARTICIPATE SOCIALLY

3) Adult Fellowship begins 17 February 7.30 pm at Hall. It will be held on WEDNESDAYS.

4) Sunday School usually begins end of February. Please gather in Church and then go to the Hall.

8) Orthodox Cafe & Bookstore starts Sunday 31 January at 11am after Holy Liturgy. This is a new initiative for young adults to mix and learn more about their Faith over a great coffee!
For more information please visit: facebook@orthodox.cafe.com.au

May God bless you all for 2020,
Fr Constantine and Parish of St Stylianos.